Attention Website Moderators
The inner page image galleries have changed - a new look and some new functionality. Working with this new gallery is slightly different than before. To learn more click here.
Menu / Navigation

As the first female elected to public office in the province of Alberta, Miss Bessie Nichols was a model of forward thinking and inclusivity. As the school named in her honour, we are committed to exemplifying and celebrating these same qualities.  At Bessie Nichols School we are committed to working in partnership with students, parents and our community to establish a world-class education and success for every one of the children we serve.

At Bessie Nichols we are proud to offer a state of the art learning space. Students and staff have access to the vast digital world and global network where they can access, understand, create and share knowledge and expertise to enhance and support their learning. We consider ourselves fortunate to be teaching and learning in a 21st century space with access to the best 21st century learning tools available.

Though we have both feet firmly planted in the 21st century, we hold closely the traditional values of Commitment, Accountability, Integrity, and Respect.  As a community of learners we are committed to always doing our very best work for the students, always strive to conduct ourselves with the utmost intergrity and insist on respectful relationships between adults and children alike.  We ask everyone in our community to share in these commitments and hold us accountable to them.

We recognize that parents play a vital role in their children's education, whether it is supporting them in learning at home, serving as a volunteer in the school or participating in our School Council, or Bessie Nichols Fundraising Society meetings and activities. It is our goal to build a strong partnership between home and school to ensure the success of every child that we serve. We look forward to parents becoming involved in supporting the critical work of teaching and learning at Bessie Nichols. Parents, you are a part of the school and are always welcome!

We encourage you to follow us for regular updates, photos and videos on the happenings at Bessie Nichols School through these electronic media.  Of course you are always welcome and encouraged to phone, email, or stop in to see us if you have ideas, questions, or concerns.  We look forward to working with you. 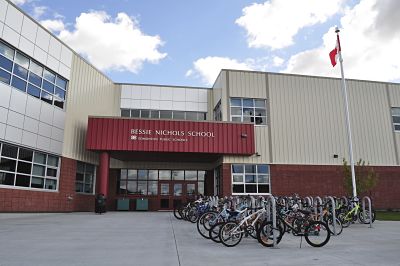